November 18, 2015
I have ephemera touting various book stores as "the best," "the biggest," or "the cheapest." But I've come across only one book store that made the following claim:

And that would be the St. Paul Book and Stationery Co., at Fifth and St. Peter Streets in St. Paul Minnesota, according to the postal history below: 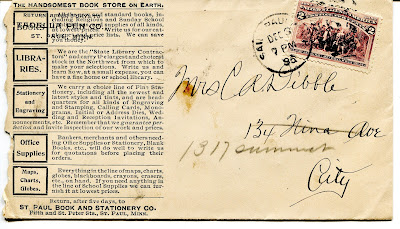 This 1895 ad cover for the book store claims its superior physical beauty, yet refrains from an illustrated representation of the premises on its business stationery. Did handsome apply to the exterior, interior, or both? What were the criteria for such a superlative?

Many other postal covers I've seen for like establishments have included illustrations of the building in which they set up shop. St. Paul Book and Stationery Co. chose to use that space on the front cover of the envelope to tell you something about their business. I would argue that was much better use of the space.

Instead of looking at the handsomest book store you ever saw, you could learn something about the business, which just might lead to your patronage in that handsome space.

You could learn about the kinds of books they stocked, their ability to help you start a home or school library, the stationery products and engraving services offered, the variety of office supplies on hand, and maps, globes, and charts, as well as other desirable school supplies.

And if you decided to visit their store, I suppose you'd just have to judge for yourself how handsome the place was and if it lived up to their claim as the handsomest.

In an 1889 edition of Caspar's Directory of the American Book, News and Stationery Trade, I found an entry for St. Paul Book and Stationery Co., which indicated that the business got started in 1879 under that name, but its origins went back to 1859 under different ownership.But I haven't been able to find an image for the shop at the address on the cover above.

In absence of any evidence to the contrary, they get the benefit of the doubt for having been the handsomest book store on earth.