He was a creative force in Texas as an author, screenwriter, photographer, publisher, bookseller, book collector, and designer of books and ephemera. Al Lowman, in Printing Arts in Texas (1975), wrote, "Quite likely there is no more diversely creative talent in Texas today than this gifted designer, artist, sculptor, historian, writer, photographer, and poker player."

I never really got to meet him other than exchanging greetings and thank yous at a book signing in Houston in 2007. I bought five copies of A Book of Photographs from Lonesome Dove, a collection of his photographs on the set of the Lonesome Dove miniseries in 1989. He was the screenwriter for that much beloved and now classic Western. He personalized a few copies for gifts, signed just his name on a few copies, which went up for sale later in my online shop, and, of course, I kept one copy he signed for my wife and me. It is certainly a treasured keepsake. 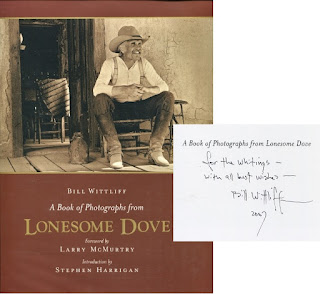 I have a small collection of ephemera designed by Bill Wittliff, much of it signed or inscribed, and I  wrote about a few pieces for this blog in 2010. I thought I'd dust off one of them and repost it rather than just reference it with a link. The images needed improvement and the writing gets tweaked a bit, but it's essentially intact from 2010.

~~~
About a decade ago I stumbled upon a Texas bookseller's online listing of ephemera designed and printed by William D. (Bill) Wittliff and his Encino Press in Austin, Texas, circa 1960s-70s. The price was very reasonable and I did not hesitate to make that collection part of my collection. In keeping with the content of this blog, I've selected one of several book-related pieces to feature here--a brochure for the second annual meeting of The Collectors' Institute in 1969. Wittliff signed (initialed) the back of the brochure. 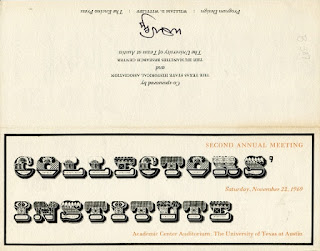 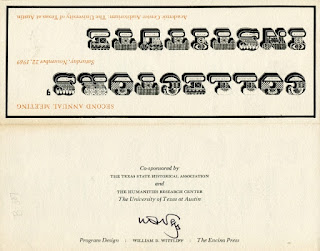 I learned from Garrett's article that the Collectors' Institute existed from 1968 to 1980. It was "a private association of collectors of library materials, including books, manuscripts, documents, and maps, cosponsored by the Texas State Historical Association and the Harry Ransom Humanities Research Center of the University of Texas at Austin."

Reading further, I realized this group's collecting interest focused on some pretty interesting material and, to that end, invited some of the giants of Texas Belles-lettres, publishing, and book design to speak to the group. What an opportunity that was! Workshops were also held to address collector interests.

The meeting's itinerary, presented inside Wittliff's brochure (below), gives an indication of what one could expect at these meetings. Looks like some pretty distinguished bookmen giving talks, conducting roundtable discussions, or being honored. Very interesting and educational, by all appearances. 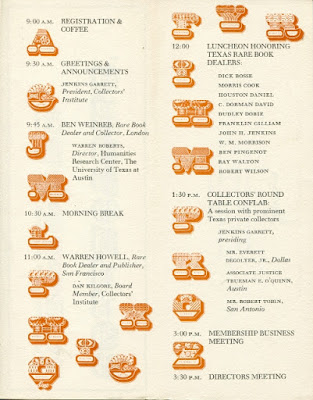 The group had twelve such annual meetings, but never met again after the 1980 meeting. I don't know why, perhaps interest waned toward the end.

I hope to find more ephemera and related items about this organization and its meetings and workshops. Meanwhile, here's Jenkins Garrett's article:

COLLECTORS' INSTITUTE. The Collectors' Institute was a private association of collectors of library materials, including books, manuscripts, documents, and maps, cosponsored by the Texas State Historical Association and the Harry Ransom Humanities Research Center of the University of Texas at Austin. It was organized on November 23, 1968, with more than 150 members. Between the fall of 1969 and 1980 twelve annual meetings were held, with programs of general interest in the area of publishing, authors, and collections. Speakers included Carl Hertzog, Hallie Stillwell, Lawrence Clark Powell, Archibald Hanna, J. Evetts Haley, and John Graves. In addition to annual meetings, workshops were held each spring. The workshop programs focused on questions of interest to collectors, such as identity, preservation, repair, and maintenance of printed and manuscript material.

Through 1973 transcripts of the meetings were published and distributed to the membership. Jenkins Garrett was president of the Collectors' Institute from 1968 through 1980. From its organization in 1968 through the fall of 1970 Kenneth Ragsdale, a fulltime staff member of the Texas State Historical Association, served as voluntary secretary and coordinator of the institute. In 1974 John Payne, a fulltime employee of Humanities Research Center, volunteered to take over these responsibilities. He served through the fall meeting of 1980. The organization was discontinued after that meeting.