February 04, 2011
Last month, I wrote about a lawyer and publisher in California, in 1898, sending a letter to Leipzig, Germany in an attempt to find a bookseller in Europe for his new book (see Any bookseller in Leipzig will do). He addressed it to Any Bookseller in Leipzig and hoped for the best. Notation on the envelope indicated he got lucky. Alfred Lorentz apparently was the bookseller who received the letter.

I thought a nice companion piece to that cover would be some ephemera from Lorentz's business. I got lucky and found something less than a month later. 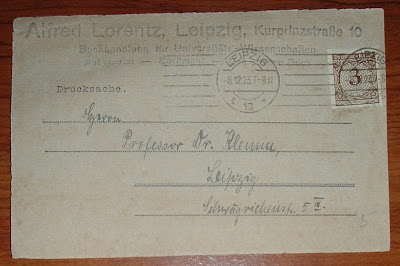 This looks like a "home-made" postcard or ad card from 1923 (postmark date). The paper is thinner than card stock and the piece is cut a bit uneven. Still it got the job done for business communications. A rough translation of the message on the backside of the card indicates that Lorentz was selling everything from novelties to classic works of literature and the arts and sciences. He invites customers to come by and examine his stock. There is also mention of a special room where rare and antiquarian books can be viewed. 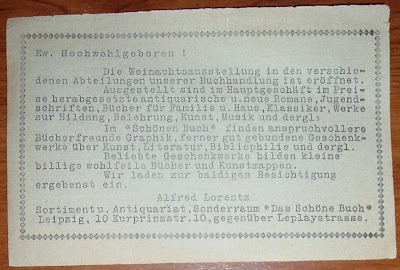 I would expect to find philosophical works as well in Lorentz's stock. In researching this bookseller, I learned of his business relationship in the 1870s and 1880s with Friedrich Nietzsche, the German-born philosopher whose writings influenced well into the twentieth century such creative figures as Albert Camus, Sigmund Freud, Carl Jung, Gustav Mahler, Rainer Maria Rilke, Jean-Paul Sartre, George Bernard Shaw, Richard Strauss, and William Butler Yeats among many others (Adolph Hitler as well).

Thomas H. Brobjer, in his book, Nietzsche's Philosophical Context: An Intellectual Biography, references the importance of Alfred Lorentz's book shop in Leipzig as a source of reading material for Nietzsche's library during the 1870s and 1880s. Brobjer's research of the ephemera related to their transactions, i.e., letters and billheads, revealed the connection between the bookseller and famous philosopher.

Some 40 or 50 years later, a postal piece of ephemera from Lorentz's book shop reveals his books were still sought by such individuals as the addressee, Professor Dr. Klemm in Leipzig. This would have to be Otto Klemm, author, editor, and Professor of Applied Psychology at the Institute for Experimental Psychology in Leipzig.

This time period from Nietzsche to Klemm, roughly half a century, is all I can find on the life of Lorentz and his Leipzig book shop that provided literature in the arts and sciences for many readers and thinkers, influential and otherwise. Perhaps the beginning and end or Lorentz's story can be found in further ephemeral pieces of his business transactions.