The Greenaway House in Boston's Bookshop for Boys and Girls, 1938

July 06, 2013
The card below features a long-standing attraction at the Bookshop for Boys and Girls in Boston from the late 1920s and beyond. The reverse side is printed with information about the dolls and a rhyming announcement for The Spring Book Festival, May 2-7, 1938 at the bookshop. 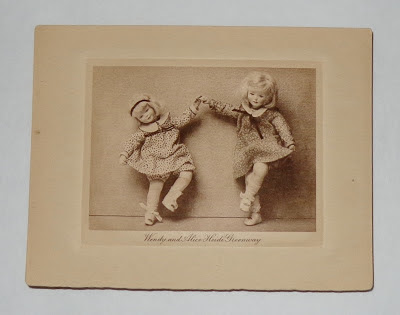 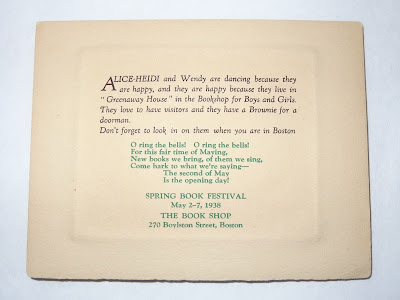 The Book Shop for Boys and Girls, an unconventional idea for the times, was conceived and started in October, 1916  by Bertha Mahony, of whom I've mentioned on this blog regarding the country's first traveling book truck devised to sell books. Read about it here: America's First Bookshop Caravan

From the Bertha Mahony biography, The Spirited Life: Bertha Mahony Miller and Children's Books, by Eulalie Steinmetz Ross (The Horn Book, Inc., 1973), the origin of the doll known as Alice-Heidi was reported in the December 1916 issue of Little Folks Magazine. As the story goes, Alice-Heidi fell out of Santa Claus' toy sack one Christmas Eve as his sleigh flew over Boston. She had the good fortune to land in the Bookshop for Boys and Girls, which had just recently opened. Children who visited the shop for a story hour provided the doll with its name.

When the book shop moved in 1921 to new and larger quarters at 270 Boylston Street, Alice-Heidi was given her own home to live in, as opposed to the fireplace mantel in the old shop. A Mr. Burleigh of the Toy Furniture Shop in Providence, Rhode Island made the doll house and its furnishings. It was christened Greenaway House after Kate Greenaway, the beloved English author and illustrator of children's books in the nineteenth century.

The Alice-Heidi doll pictured in the card above is not the same doll that landed in the bookshop in 1916. Mahony was not satisfied with the look of the doll and changed it every year until she met a woman named Laura Mackay in 1928, who made scale models of people for museum exhibits. She was able to craft a doll for the bookshop that looked like a small person, which was exactly what Mahony had sought for years. Mackay also made a sister for Heidi-Alice, named Wendy, as well as a companion, Brownie, for the sisters. The card above mentions that Alice-Heidi and Wendy were happy to live in Greenaway House, where they had a doorman named Brownie.

Below are photos from Ross' The Spirited Life that show the Bookshop for Boys and Girls at its first and later locations. In each, only Alice-Heidi is pictured--on the mantel at the first location and in the dollhouse (Greenaway House) at the later location (270 Boylston Street). Wendy and Brownie were not yet a part of the family. You may need to click on the picture to enlarge it for a more detailed view. 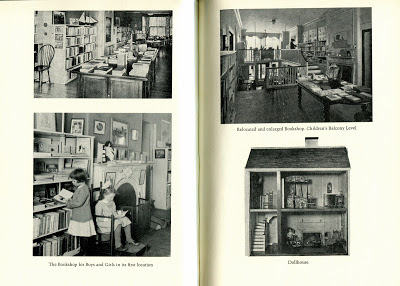